HELP RESCUE A CHILD FROM HOMELESSNESS THIS WINTER

Domestic violence is not an easy conversation to have, but it might just be the most important conversation we can have right now.

So often, hidden behind the doors of Australian suburbs, you may be surprised to know that 1 in 5 Australian women have been impacted by domestic violence.

Driven by fear and misplaced shame, domestic violence has grown to be a silent, invisible crisis that impacts hundreds of thousands of Australian women.

In any home, any street, any suburb - domestic violence does not discriminate on race, age, marital status, class or gender.

If you think of a neighbour, a work colleague, a friend, a member of your extended family, or even the person who packs your groceries at the supermarket, there's a good chance you know someone impacted by DV.

Without action, we will see women forced to choose between staying in a violent home, or the prospect of sleeping in her car, a friend's couch or worse.

Breaking the cycle of homelessness

It's true that domestic violence is a very complex problem. it requires many facets of our society to help address the issue. 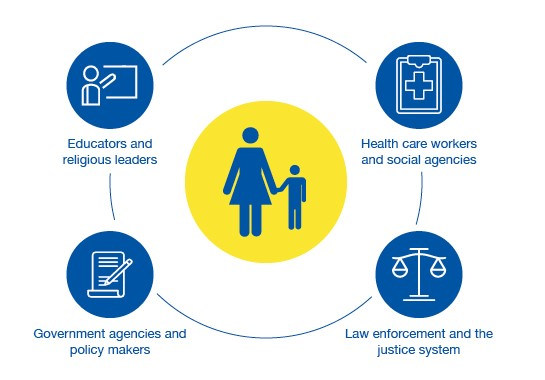 You may think to yourself, “what can I do to make a difference to such a big problem?” As a community, we must do all we can to arm ourselves with knowledge about this hidden crisis. By doing so, we can start having the conversation about domestic violence and homelessness.

What is domestic violence?

Domestic violence is often thought of as being mainly about physical abuse of a woman by her male partner. However, domestic violence is not always physical. It can be any behaviour used to exert control over a another person through fear.

Coercive control, which often starts with controlling behaviour by a partner, can quickly evolve into abuse and violence.

Who is impacted by DV?

While both men and women experience incidents of domestic abuse, women are considerably more likely to experience repeated and severe forms of abuse committed by men — usually an intimate partner. 1 in 5 Australian women and 1 in 16 men have been subjected to physical and/or sexual violence by a current or previous cohabiting partner.

Some groups are at greater risk of domestic violence:

How widespread is the problem?

Violence against women is a serious and widespread problem in our community. Across the country, our police deal with 5,000 domestic violence matters on average every week. That's one every two minutes.

There are a number of theories which attempt to explain the causes of domestic violence. Some theories look to the individual perpetrator’s use of drugs or alcohol, mental illness, stress or family history. Other theories suggest the cause is our society which accepts inequality. There is no one simple explanation of such a widespread and complex issue.

What are the long term impacts of DV?

Violence against women in Australia costs Australia $21.7 billion each year (2015 analysis). But, the profound and long-term toll on women’s health and wellbeing, on families and communities and on society as a whole cannot be understated.

Domestic violence has severe and ongoing effects on physical and mental health on its victims. Women can sustain physical injuries and be left with long term post-traumatic stress disorder. In fact, domestic violence is the leading risk factor contributing to death, disability and illness in women aged 15 to 44[i].

Children who witness the violence are the secondary victims. They are at greater risk of social, behavioural, cognitive and emotional disadvantage which can have a lifelong impact on their education and employment.

Why don’t women leave the perpetrator?

By understanding the many barriers that stand in the way of a woman leaving an abusive relationship – be it psychological, emotional, financial or physical threats – we can begin to support and empower women to make the best decision for them while holding abusers solely accountable for their behaviour. Here are just a few of the reasons that prevent a woman leaving:

One of the most common reasons women don’t leave is because it can be very dangerous. There is a huge rise in the likelihood of violence after the women leaves the perpetuator.

Domestic abuse often relies on isolating the victim: the perpetrator works to weaken her connections with family and friends, making it extremely difficult to seek support. Perpetrators will often try and reduce a woman’s contact with the outside world to prevent her from recognising that his behaviour is abusive and wrong. Isolation leads women to become extremely dependent on their controlling partner.

Perpetrators are often well respected or liked in their communities because they are charming and manipulative. This prevents people recognising the abuse and isolates the victim further. The perpetrator often minimises, denies or blames the abuse on the victim. Victims may be ashamed or make excuses to cover up the abuse.

Perpetrators of violence often control every aspect of their victim’s life – making it impossible to have a job or financial independence. By controlling access to money women are left unable to support themselves or their children. They may fear having their children taken away or, if she has an insecure immigration status, may fear being deported.

Australia’s crisis of affordable, secure, stable housing dates back many years. We are in the midst of a housing crisis as a result of a lack of investment in social and affordable housing.

Because of the lack of affordable housing, people who were already vulnerable – such as women impacted by domestic violence – will have an increased risk of homelessness.

DV is the leading causes of homelessness for women. Put simply, you can’t escape DV if there are no houses to escape into.

What are the signs of DV?

These are just some of the signs that a person is being affected by domestic violence:

Because every case of domestic violence is different, it’s impossible to list every sign. However, these are some of the most common signs which we can all look out for in our friends, family and loved ones.

What do I do if I suspect a friend is in the situation?

It can be hard to know what to do for the best, and often people are hesitant to bring up what is often thought to be a very ‘private, family or intimate’ matter.

Ring DVConnect or 1800RESPECT for professional advice tailored to the indicators that have led you to suspect the friend is experiencing DV or in a controlling relationship.

Close personal friends could possibly try adopting a more neutral approach (asking why they seem upset rather than directly broaching the DV concern) as given in Qld Gov’s advice below, but not unpack the abuse.

What do I do if a friend confides they are in a DV situation?

If they are in immediate danger, call the police on Triple Zero (000). Otherwise, encourage them to ring DVConnnect (1800 811 811) in QLD or national helpline1800 RESPECT (1800 737 732). To get professional advice on how best to support them, you can also ring DVConnect or 1800 RESPECT without revealing your friend’s identity. Listen, avoid judgement, criticism or telling them what to do. Explore possible options and continue to reassure them.

What’s the connection between DV and homelessness?

Domestic violence is the leading cause of homelessness for Australian women.

For victims of domestic violence, access to housing that’s secure, affordable and immediately available is the number one constraining factor to escaping the violence.

Because of the high costs associated with leaving the family home, many women in abusive relationships return to the perpetrator of the violence. The ABS found that 37 per cent of women who experienced violence from a current partner had separated and returned.

The homelessness caused by domestic violence is closely tied to a victim’s financial independence. In Australia, women are usually economically worse off than men: they are more likely to take time out of the workforce to take on caring roles and to work part-time and are paid less than their male counterparts for the same work

What does Vinnies do to help women impacted by DV and homelessness?

There is no ‘one size fits all’ solution to help people impacted by domestic violence and homelessness. At the very least, stopping DV starts with a safe place to go. Just one night of safety can stop the violence long enough for women to have a conversation which could lead to a path of recovery.

Vinnies offers a number of interventions which are delivered through a combination of volunteer and professional support: 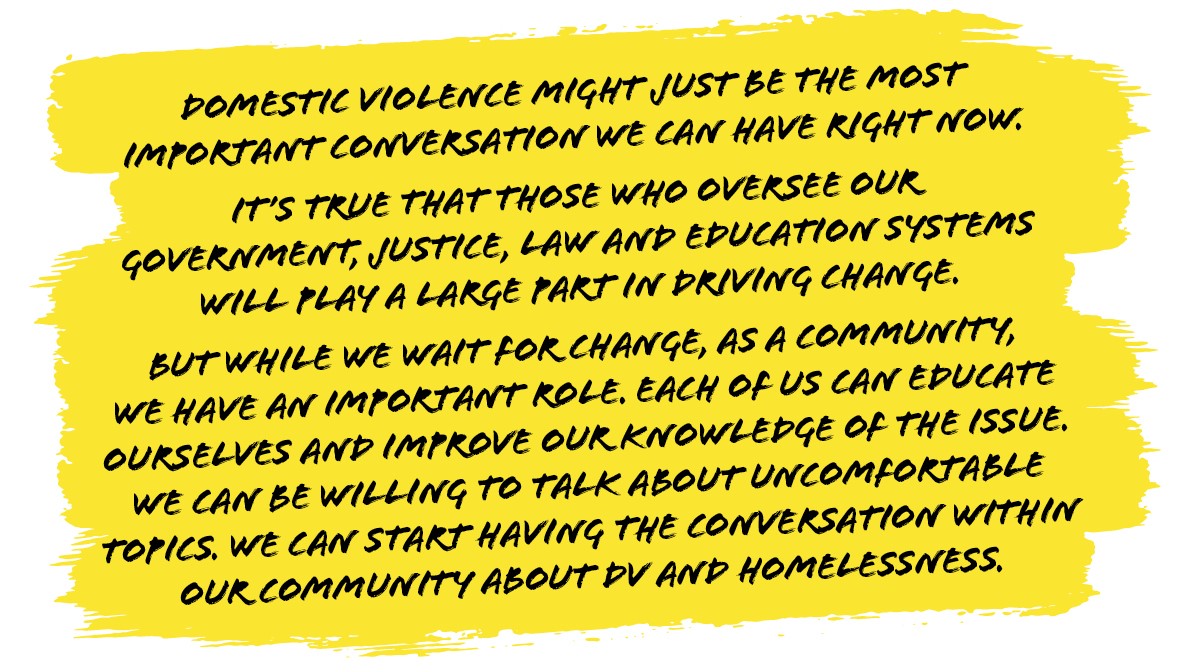